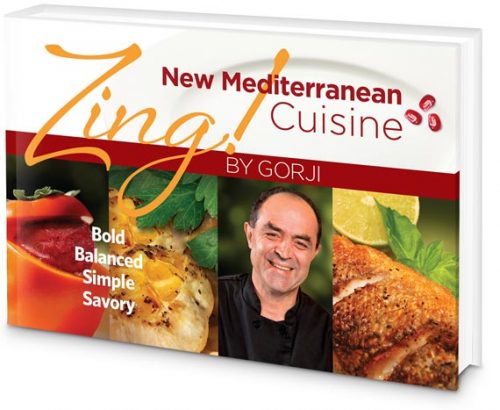 DALLAS, TX—Gorji, chef-owner of Canary By Gorji restaurant in Dallas,TX has received top book awards from members of the established independent publishing awards community with his first-ever cookbook, Zing! By Gorji – New Mediterranean Cuisine. It is part innovative cookbook, part autobiography and part guide to great culinary shopping tips and methods for creating “New Mediterranean cuisine” including how to use ingredients such as pomegranates, barberries, limes and sumac to infuse dishes with bold flavor.

The awards are a great honor, says Chef Gorji, who has helmed his intimate restaurant nightly for the past 12 years and worked on “Zing!,” a labor of love diligently during this demanding schedule. “There were a lot of long days and weekends devoted to this project but I couldn’t be happier that my story is receiving such widespread acceptance. With this book I have a chance to share some of my recipes—along with the unique sauces of Gorji Gourmet Foods—with people from all over the world.” The latest sauce to be added to the Gorji Gourmet lineup is Arrabiata Diavolo, introduced in late 2014 that has been heating up many of his recipes and has inspired new ones. Gorji compares his spicy Diavolo sauce to writing his cookbook: “The devil is always in the details!”

To date, Zing! By Gorji cookbook has taken home five top awards in book publishing contests, four in cookbook categories and one for best book/author/publisher website.

National Indie Excellence Awards – 2 WINNERS–International & Regional Cookbook Categories
Recognizing authors that put their heart and soul into their work, the National Indie Excellence® Awards is proud to be a champion of self-publishers and small and independent presses that go the extra mile to produce books of excellence in every aspect.”Awarded since 2007, the competition is judged by independent experts from all aspects of the indie book industry, including publishers, writers, editors, book cover designers and professional copywriters.

No Replies to "Zing! By Gorji Sweeps Indie Book Awards"