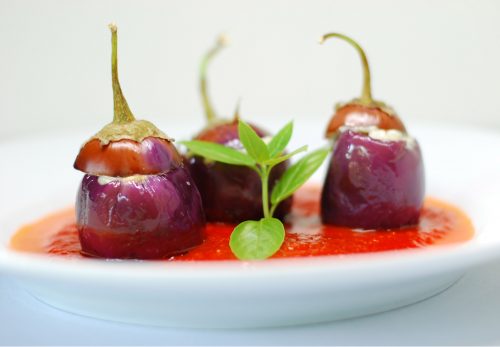 Chef Gorji’s Mediterranean food pays homage to French, Greek, Italian, Spanish, Middle Eastern, Turkish, and North African cuisines, but are not defined by nationality or authenticity. Taking the best elements, techniques, and ingredients from there and combining them with what is available in the markets here, he creates his New Mediterranean Cuisine. Specializing in upscale fine dining with a romantic dinner setting, Gorji features New Mediterranean specialties, as well as steak and Seafood. Eater Dallas praises it as Addison’s best restaurant and The Dallas Observer as having one of the best steaks in the metroplex.

The changing New Mediterranean Cuisine menu at Gorji restaurant includes dishes like escargot in Pomodoro sauce, duck breast with red plums, pan-seared quail legs with white wine pomegranate reduction, and lamb tongue crostini. D Magazine wrote about the lamb brain paté, trout yogurt, venison tenderloin, and baby eggplants with gorgonzola and Arrabiata sauce. There is a mezzo with hummus, tabbouleh, tzatziki, dolmas, and other specials. But unlike other Mediterranean restaurants, there is no tahini in that hummus. Instead, an imaginative, personal, and highly memorable take on enhancing natural flavors.

The engineer-turned-chef passionately blends science and Old World “hot and cold” theories, creating unexpected ways to combine ingredients. Often going against the grain of traditional culinary practices, he likes shorter cooking times, uses few spices, and very little or no sugar. He adds flavor with ingredients such as pomegranates, sumac, and barberries. Pure olive oil. Lots of limes. In most instances, he sautés, roasts and grills, vegetables, meats, and seafood by brushing them only with olive oil, salt, and pepper.

In Gorji’s New Mediterranean cooking he seldom uses batters, coatings, or rubs. First and foremost, he wants the main ingredient to be recognizable, flavorful, and complementary with, but not secondary to, other elements in the dish. His Mediterranean food uses very little sugar, instead, he uses natural sweeteners like honey and fruit. Zing! New Mediterranean Cuisine, his cookbook, features cooking philosophies that food should be bold, balanced, simple, and savory. Zing! includes 75 of “New Mediterranean Cuisine” recipes.

Gorji, the back-to-back Texas Steak Cook-Off Champion’s food has been called “Mediterranean with Texas Twists” because of how he often blends ingredients like Texas Ribeye with Pomegranates and his Mediterranean style gourmet catfish.” Other specialties include his best steaks including prime beef, wild boar, lamb T-Bone, and venison as well as duck breast, fish with puttanesca sauce, poached trout with yogurt, and elephant garlic to name a few. Every week he offers a special prix fixe menu that often features seasonal Mediterranean food treats like this spring’s green almonds with tabbouleh.

“Many of the old world dishes relied on heavy spices and long cooking times. I use the freshest ingredients, prime cuts of meats, minimal spices and have developed short cooking time techniques that allow me to make these dishes with their old world essence, but per order for my guests,” says Gorji

What The Critics Are Saying …

Dallas Observer names Gorji Restaurant #15 in  The top 100 Dallas Restaurants. The dining room is small, the atmosphere is intimate and each table is booked for only one party per night, which makes this one of the most romantic restaurants in Dallas.

Paper City Dallas: No-Tipping Restaurant Shakes Up the Dallas Food Scene Chef’s Crazy Idea Works Wonders at this Underrated Top Spot. Chef Gorji takes the best elements and essence from the Mediterranean cuisine and melds them into simple, but flavorful, exquisitely crafted dishes. Think, escargot in a Pomodoro, Gorgonzola mushroom sauce, and baby eggplant stuffed with Gorgonzola dolce in an arrabbiata style sauce. Followed by Texas wild boar tenderloin with sea scallops and Gorgonzola gnocchi with grilled Campari tomatoes. And for dessert, you ask? A provocative beer-float — vanilla bean ice cream drenched in aa dark Israeli stout beer. Delicious is an understatement — if I could swim in it, I would.

Eater 38 Essential Restaurants “… Gorji has been keeping it real in the northerly parts of Dallas for more than a decade. Start off with a plate of delicate baby eggplants stuffed with gorgonzola and topped with Pomodoro sauce, then treat yo’ self to Gorji’s epic paella made with rabbit, chorizo, mussels, and shrimp.”

D magazine calls this small, Dallas restaurant “one of the most underrated in town”. Chef Gorji’s brand of mostly-Mediterranean-with-a-touch-of-Texas-style food is distinctively different from other global menus.” The review goes on to say that “.. Gorji’s food, is clean and naturally delicious.”

D Magazine 2019 “Gorji combines elegance and simplicity with a particular talent for lightness, a willingness to let herbs speak, and lushness complement without burdening. Around us, the consensus seemed clear…a meal is a treat, from the well-picked wine to the soft, house-made sheeps’s milk cheese served for dessert…”Read full article by Eve Hill-Agnus, D Magazine, Dining Critic

CultureMap, the Dallas lifestyle blog describes Canary By Gorji as having “gracious service and an exotic “new Mediterranean” menu that’s as impressive as it is unexpected. Dedicated chef-owner Mansour Gorji uses novel ingredients such as pomegranate on dishes that incorporate a swath of influences, including French, Greek, Italian, Spanish, and North African. You’ll feel like this is your special discovery.”

“One of best tenderloins in Dallas Fort Worth Metroplex”—Dallas Observer

“He will dazzle your taste buds and your heart.”—DMagazine

“Absolutely amazing experience. Small restaurant, big flavor! The service is amazing and the food is superb. Our group is not local to Texas, but we have all agreed that the next time we are in town, this IS THE PLACE to get a fantastic meal experience.” —Yelp

“My husband and I had the good luck to be in Dallas while on business from Houston. Gorji is world-class dining is a small, intimate setting. I can’t remember the last time that the chef/owner came out to greet guests and explain the finer points of the menu. Very nice touch! The food is prepared with love and expertise, and the service is friendly without being overbearing. I don’t even like okra, but I cleaned every scrap from my plate because it was so delicious. The wild boar is simply excellent, and if you feel up for a little adventure, try the beer float served elegantly in a martini glass with a dessert rusk. So much to choose from, both food and wine. We’ll definitely be back!”—Google

“My husband and I had dinner at this lovely little restaurant without any clue how special the experience would be. We were on a business trip in Dallas and picked the restaurant from its online reviews. The chef is amazing and the service was stellar. We loved the bottle of Grenache we chose and everything we ordered was sumptuously delicious. If you want to be pampered like you’re a famous A-lister, have dinner at Gorji. I just wish he’d open shop in Seattle!” —Trip Advisor

Gift Packs
Thanks for letting us know!
This is how we improve bertha
What did you expect to happen?
Ask Bertha to Write About Anything
From email subject lines to full on blog posts and even Facebook adverts
Copy to clipboard
Add to Favourite
Report
Insert Default Content